In this MA seminar at the Department of Social and Cultural Anthropology, University of Vienna, we explore digital media technologies from an anthropological/ethnographic perspective in the context of material culture.
More info

Mobile networked digital media technologies, such as smart phones, as well as social media platforms and services, such as Facebook or Instagram, have become important (visual) communication and (re)presentation tools. For social and cultural anthropology it is of particular interest how these digital devices and technologies are integrated and embedded into everyday life, by considering changing sociocultural, political and economic contexts. This course focuses in particular on the material aspects of digital technologies and how they are utilized on a day-to-day basis. Questions about the relevance of a material culture approach for (the understanding of) technology appropriation – on a theoretical and practical level – as well as questions about (culturally) different usage practices are discussed. How does the understanding and conceptualization of digital technology as material culture contribute to the exploration and analyses of contemporary and emerging sociocultural practices and processes in increasingly digital societies?

By working on different online case studies, students get a comparative overview about material culture in a digital context.

END_OF_DOCUMENT_TOKEN_TO_BE_REPLACED

For the MA Program “Visual and Media Anthropology” at the Free University Berlin, I am organizing a newly developed seminar on media activism.

Activism with/in/through media can be broadly understood as forms of technology mediated activism that intend to spark, create and/or support social and political change. So change (and therefore continuity) is at the heart of media activism, as, for instance, Kidd and Rodriguez (2009: 1) note: “Grassroots media have grown from a set of small and isolated experiments to a complex of networks of participatory communications that are integral to local, national, and transnational projects of social change”. Since media activism is related to a diversity of phenomena – such as power relationships, conflict or globalization – as well as to questions about the conception of time and space, organizational structures, collective identities and different forms of sociality, it has become a broad, interdisciplinary research field. This course gives an overview of media activism from a predominantly anthropological and ethnographic perspective.

When engaging with media activism, a variety of contexts, theoretical conceptualizations and methodological approaches have to be considered. In this course, students learn about these aspects by reviewing relevant literature and by discussing different forms and examples of media activism and related questions, issues and problems:

END_OF_DOCUMENT_TOKEN_TO_BE_REPLACED

Seminar “Indigenous Media” for the MA Program in Visual and Media Anthropology at the Free University Berlin.

Indigenous media can be broadly defined as media and forms of media expression conceptualized and produced by indigenous people. From an anthropological perspective, indigenous media can be understood as cultural product and process that are both closely connected to the construction, expression and transmission of identity. Reflecting thus indigenous people’s history as well as contemporary sociocultural and political situations. By (strategically) inserting their own narratives in the dominant media landscape – may this be accomplished through films, TV and radio programs, or websites – indigenous people also utilize media technologies as means for social change and political transformation. Indigenous media-making practices have thus become part of the “ongoing struggles for Indigenous recognition and self-determination” and can therefore be understood as a form of cultural activism (e.g., Ginsburg 2000: 30).

END_OF_DOCUMENT_TOKEN_TO_BE_REPLACED

The following joint student projects are conducted in the seminar “Media and visual technologies as material culture” at the Department of Social and Cultural Anthropology of the University of Vienna:

This course gives an overview about material culture as conceptual approach to understand media and visual technologies. It focuses on digital media technologies, their visual aspects and how they are integrated and practiced in everyday life.

END_OF_DOCUMENT_TOKEN_TO_BE_REPLACED

Word cloud of the student projects in the seminar “Identity, sociality & communality in times of digital media technologies” at the Department of Social and Cultural Anthropology, University of Vienna. 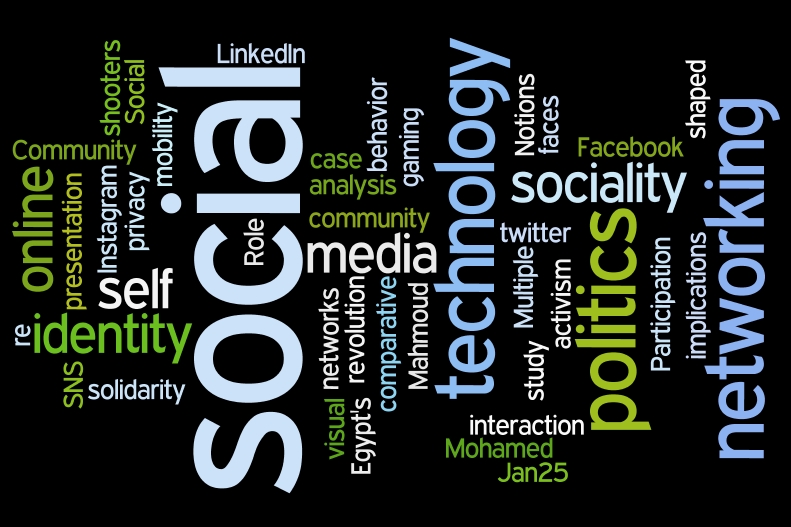 In the seminar “Identity, sociality & communality in times of digital media technologies” at the Department of Social and Cultural Anthropology, University of Vienna, students work in research teams on aspects of privacy, gaming, movements, participation, solidarity and visual culture.

In the winter term 2012/2013, I am teaching a seminar on “Identity, sociality and communality in times of digital media technologies” at the Department of Social and Cultural Anthropology, University of Vienna. Students in this course learn about and to work with different forms of identity construction and processes of sociality and communality, which have been made possible through digital media technologies, such as the internet. Students get a brief overview about identity concepts and the possibility to deploy them within empirical research projects.