Within a project different digital learning materials for the social sciences, particularly at the University of Vienna, were developed. This is a hypermedia learning and teaching document for introductory courses in social and cultural anthropology (in German). 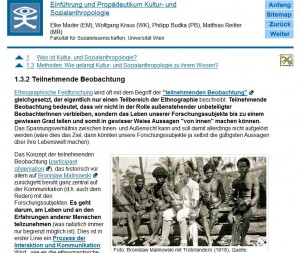 Abstract
This paper introduces the case of an interactive technology enhanced learning model, its contexts and infrastructure at a public university in the Bologna era. From a socio-technological perspective, it takes a look at the conditions and challenges under which this flexible learning model for the social sciences has been developed. Furthermore, selected evaluation results, including experiences and expectations of social science students, are discussed. The paper concludes that it is possible, with the appropriate didactical model, to create and facilitate interactive student-centered learning situations, even in “mass lectures”.

Denise Williams believes strongly that broadband Internet access can help First Nations in British Columbia broaden the opportunities available on their often rural or remote reserves. The 27-year-old member of the Cowichan Tribes likens high-speed pipes to the roads that connect a community to the rest of the world.

“It’s the infrastructure that’s going to strengthen the entire social fabric of the community,” Williams told the Georgia Straight at a café in Kitsilano. “So, it’s education, it’s health, it’s justice, it’s economy—it’s all of that.”

Williams is the youth initiative officer for the First Nations Education Steering Committee, a West Vancouver–based organization established in 1992 to support First Nations education activities in the province. While 80 of the 203 First Nations in B.C. are still waiting for broadband—a plan to connect them could be announced by the end of the year—the committee is looking at using Internet technology to facilitate the teaching of classes in band-run and independent schools on reserves.

High-speed connectivity allows on-line teleconferencing and video conferencing, as well as interactive applications that incorporate slide shows and instant messaging, to be employed in the delivery of distance education, Williams noted. Using such synchronous technologies, a teacher can remotely instruct a class comprising students in several locations.

Abstract
The changing higher educational landscape in Europe creates new learning infrastructures and transforms existing ones. Students are thus provided with new possibilities and challenges. Through the case study of a newly developed common curriculum for the social sciences of a public university in Austria, this article discusses the interacting social agents, elements, and tools of a flexible and interactive technology-enhanced learning model. In doing so, the transnational, national, and local infrastructural conditions and challenges are critically examined from a socio-technological perspective. Selected evaluation and survey results highlight students’ learning practices, usage behavior, and suggestions to improve their learning situation. The article concludes that student-centered learning models focusing on flexibility and interactivity can support the stable implementation of a common curriculum and its technology-enhanced learning infrastructure for the social sciences at public universities with high student numbers.